When a company is trying to stay at the top of its field and remain competitive for work, along with delivering a quality product, time truly is money. One way to turn time into money is by employing the right technology.

Fabiano Santos is the Director of Advanced Technologies for Allen & Company. He recognizes that investing in technology can give a company an edge over its competitors.

“The tech, it’s just where the market is going. You can’t run from it. You definitely need that if you want to grow your business and if you want to look forward to what’s next.”

Allen & Company has been at the forefront of land surveying excellence for over 30 years. Based out of Winter Garden, Florida, their team of more than 80 professionals is led by seven licensed Land Surveyors. They provide a wide range of surveying services including boundary and topographic surveys, home builder surveying, commercial construction surveying, aerial mapping via Unmanned Aerial Systems (UAS), hydrographic mapping, subsurface utility exploration (SUE), 3D laser scanning, and modeling and simulation.

They’ve recently undertaken an expansion to Texas in a move that will allow them to grow their clientele while servicing the entire southeastern United States. And with the abundance of oil and gas in Texas, there are potential opportunities involving large tracts of land. 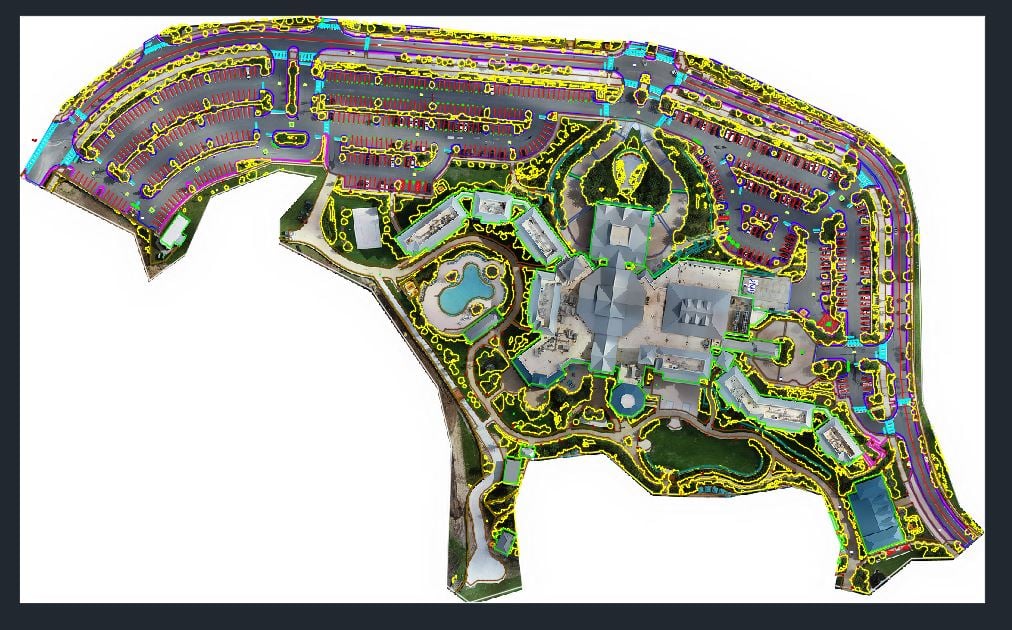 As seen above: One of the projects Allen & Company used AirWorks to complete.

Staying at the head of their field allows Allen & Company not only to thrive during prosperous times but also to remain competitive and viable to their clients during economic downturns. That’s the dual role Santos sees technology playing in the surveying arena.

Like many firms, Allen & Company struggled during the recession of 2008-2009. Within the span of a month, their employee pool went from more than 60 workers down to five.

“It was a big hit and that’s what we don’t want to have to go through again. So, we’re just planning on diversifying and using tech to help with the growth of the company”, Santos said about the reduction in employees they encountered during the recession.

Finding the right technological applications can allow a company to still produce quality work at a high rate during an economic downturn or a labor shortage. A smaller staff will have to divvy up the same responsibilities as a larger staff. Technology can allow them to generate their product at a faster rate so that their staff has more time to handle crucial business functions created by a reduction in employees.

Technology also allows them to keep their overhead expenses down and still expand the company significantly, as they are with their move to Texas. Expanding their business also creates the real potential to considerably increase their client pool. With an increased clientele comes more work. The technology allows them to handle more work by diverting a portion of their staff to focus on a large-scale hiring process.

Santos, who spent five years in Brazil laser scanning oil refineries and platforms and mining operations, began to look for technological options to help Allen & Company stay ahead of their competition. As the Director of Advanced Technologies, Santos is responsible for looking for technological methods that will help his team remain competitive in their field.

He wanted to find a product that would help them bypass the national labor shortage and optimize their workflow. With the expansion to Texas ongoing, and the opportunity to scour the entire southeast for work, technology was one way they could neutralize the labor shortage effects.

Santos initially studied other, similar products. He discovered that they couldn’t provide the necessary level of service for the survey tasks his team performs. He also found that there was additional upfront work before the final product was produced.

So, Santos turned his focus to AirWorks.

What ultimately sold Santos was the ease of use, specifically dealing with AirWorks.

“You upload something, you draw a line, and it’s done. And that’s the beauty of it. It’s just practical.”

Santos said they have one or two project managers who have become their go-to employees for using AirWorks.

Each survey crew at Allen & Company has a GPS and a drone on their trucks. So now the crews can fly each job. And thanks to the ease of AirWorks, basemaps are now generated that much faster. The time saved through workflow optimization allows project managers to focus on bringing in additional work.

Before implementing AirWorks, Allen & Company used to compile their survey plans the conventional way through the combination of points and field notes.

They turned towards flying jobs with a drone. This allowed them to draft off a picture. Discovering AirWorks was “the holy grail” for Fabiano’s team.

“So now we fly all of the ALTAs that we have and mainly send it to you guys and work on that. It streamlined our process and allows now the project managers to take in more work. That’s where their time is focused on.”

The quality of the product is there too. Santos notes that in one year of working with AirWorks, he’s only had one question as to what their product showed. A section of a 5-ft sidewalk that was questionable. 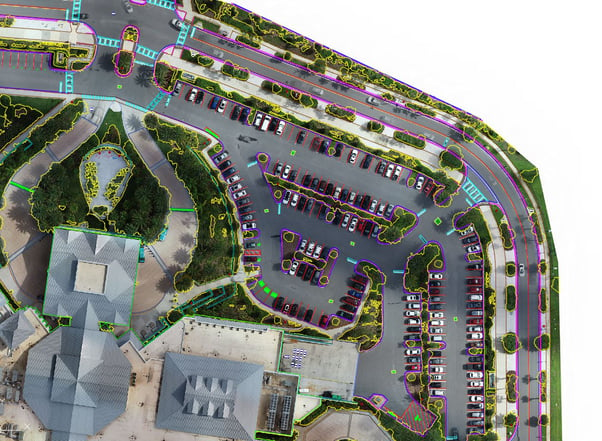 Partnering with AirWorks provides Allen & Company the best of both worlds. When they can bid jobs conventionally, they increase their profit margin because AirWorks’ AI technology allows them to complete the work faster and more efficiently.

The other option they have is to aid their client by lowering their bid. This allows clients to be more successful in securing contracts. Lower bids allow Allen & Company to secure more work. They’re confident that they’ll be the low bid thanks to technological advances. Either way, they’re increasing their revenue with bigger profit margins from conventional bids or with an increased workload thanks to lower bids.

AirWorks delivered on Santos’ desire to find a technology that saves time and money. He estimates that AirWorks saves them between 60-70 percent of plan drafting time while paying AirWorks 25 percent of what it would cost them to perform the same tasks in-house. AirWorks completes in one day what would take Allen & Company four days.

On the horizon, Santos is highly anticipating AirWorks developing an algorithm to work with the LiDAR point clouds in addition to the ability to draft 3D linework.

Until that time, Allen & Company will continue to partner with AirWorks to produce faster, more cost-effective CAD plans.