In our blog post from May of this year we discussed the advances made in surveying through the introduction of technology.

New tools and processes continuously improve speed and efficiency for professionals in the surveying and engineering industry. These benefits ultimately trickle down to the entire real estate and construction industry, with the aim to keep up with booming construction and need for maintenance of existing infrastructure.

If you're a civil engineer or surveyor you probably don't see the term Artificial Intelligence all that often, and if you do, it probably wasn't at the office. But more and more, terms like artificial intelligence (AI) are starting to be more commonplace in the industry. But don't take our word for it, in ASCE's 2019 "Future World Vision: Infrastructure Reimagined" a number of high-level themes were identified surrounding skills civil engineers will need in the near future. One of those themes describes that civil engineers will need to: "Harness advances in technology and computing power to improve tasks performed by humans."

So, what is AI? The term "artificial intelligence" is often used to describe machines (or computers) that mimic cognitive functions that humans associate with the human mind, such as "learning" and "problem solving". Relative to business uses AI could be described as the ability of computers to perform a task that typically requires some level of human intelligence. A good real-world example of AI that captures public attention recently are autonomous (driver-less) vehicles, which combine sensors and software to control, navigate, and operate the vehicle. Currents solutions rely heavily on sensors that are analyzed and interpreted with AI or machine learning based algorithms to identify and classify objects within the vehicle path.

A subset of AI is machine learning, which is the concept that a computer program can learn and adapt to new data without human interference. Machine learning and more advanced deep learning algorithms build a mathematical model based on sample data, known as "training data", in order to make predictions or decisions. Autonomous vehicles use machine learning for the purpose of visual object recognition, in simple terms they are learning what objects look like using the training data and then apply that knowledge in new, previously unobserved scenarios to determine what to do once an object is recognized (Image credit: Medium/Seema Singh). 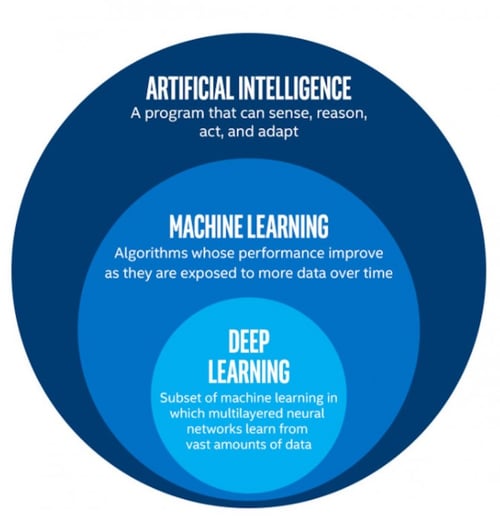 One area where AI and machine learning is starting to be used successfully is object detection in Geographic Information Systems (GIS). Using imagery from satellite, aerial or UAV the software can be taught to identify and extract geographic features such as buildings, trees, cars and roads. The ability to quickly and easily detect and classify these items has endless analytical value for GIS users as described recently by Rohit Singh from ESRI in this article (image credit).

It’s easy to imagine that the ability to identify and analyze objects from aerial imagery has significant value: A City or County Tax Assessor for example can now identify new or expanded structures automatically on an annual basis. But how does this matter to those of us in the surveying and engineering fields? Detecting an object is fine, but simply detecting a building doesn’t provide detailed and accurate information to use for design purposes.

AirWorks observed early how UAV's could be used to speed up the process of traditional land surveying by allowing faster and safer collection of data to create existing conditions plans. Since 2017 we have seen more and more engineering and surveying firms establish UAV programs and implement aerial mapping into their standard processes. The efficiency gained by UAV's helps to put important information into the hands of designers much faster than traditional on-the-ground methods. While UAV's won't ever eliminate the need for traditional surveying, they have a established themselves as a tool in the modern surveyor’s toolbox.

More and more surveyors are using UAV's to create existing conditions plans in conjunction with traditional collection methods to reduce time spent in the field. While aerial data speeds up data collection significantly, ultimately a real person is still doing the hard work of converting the datasets into CAD drawings to create the existing conditions plan. This work is very time-consuming, and display and processing large UAV datasets requires powerful IT systems companies are often not equipped for.

Here at AirWorks we are developing AI powered software that will process aerial data sets automatically into usable CAD files in a fraction of the time.

AirWorks builds automated software for civil engineering and land surveying professionals to extract value from UAV and other aerial datasets. Using machine learning and deep learning, the software detects various features from your UAV imagery and then draws the features and provides the user with a CAD file in .dxf format. Our software automates drafting of repetitive and time-consuming features allowing surveying teams to focus on value added tasks and quality control.

Some of the more obvious benefits of this type of technology include reduced time spent by field crews and reduced effort to draft the most common features such as roads, pavement striping, vegetation and buildings. We expect users to see at least a 50% reduction in time spent drafting on most projects. This allows for accelerated turnaround time for project deliverables and the ability to produce more surveys with the same staff. Our vision is that accurate existing conditions can be produced easily on any site – helping engineers and surveyors to focus on complicated work that requires humans in the loop, such as interpreting drawings and design work.

We’d be happy to walk you through the features and services of AirWorks. Contact us here to get a demo of our software and see how you can implement autonomy in your aerial surveying workflows. And be the first to know when this platform is publicly available by subscribing here.