Why use UAVs in aerial mapping projects?

While many firms in the industry have fully embraced and implemented UAVs in their daily mapping workflows, there are others that continue to favor traditional methods for a variety of reasons.

For some, the investment required to purchase a quality drone is not a possibility given their current project volume or team expertise. While a business might not be ready for full UAV/UAS adoption, that doesn't mean that a drone purchase will always be out of the question.

Whether using drones for mapping projects is a priority for your time right now, or in the near future, there's no denying that moving towards aerial mapping with UAVs will become even more common in the coming years.

If you are still debating it, here are some of the main benefits a well-established drone fleet can bring your business.

In the past, high-resolution mapping could only be done with multi-million dollar vehicles such as helicopters, planes, or satellites. With the rise of commercial-grade drones and other hardware for surveying and mapping projects, datasets can be collected in less time than it would've taken to plan a single large-scale aircraft project in the past. And, although drones are smaller than traditional aircraft, they are nimble and fast, so they can cover large areas at higher resolutions in a similar time frame.

Maintain data accuracy with sensors and other hardware.

One concern that is common when making the switch to UAVs for mapping is whether they are capable of collecting accurate data. Luckily, recent developments have given rise to high-end cameras and sensors, many of which are designed specifically for survey-grade projects that can collect HD image, video, and LiDAR data, among others. Pairing these with easily accessible software, firms will discover that it can make their drone effective at creating datasets that can be accurate to a near 1:1 ratio.

When operated by a well-trained and certified pilot, UAVs pose near to no safety risk to operators or bystanders, as they are small and lightweight. They are usable from a safe distance, have many built-in safety and emergency avoidance features, and are unlikely to crash from non-user errors. Even in the case of accidents in the air, their relatively small size presents a very low risk on the ground. 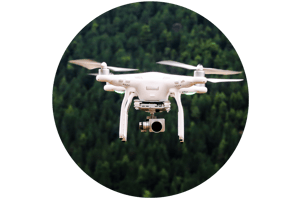 Being small aerial vehicles, drones only need electricity to function. This means they do not generate harmful gasses or byproducts like plane engines and do not burn many resources beyond being recharged or plugged into an electrical outlet. Besides occasional maintenance work, they don't require much else, making their potential for pollution minimal.

Increase efficiency by using technology to speed up tedious tasks.

As mentioned before, drones have the potential to significantly cut down data collection time. This presents a massive opportunity for firms to use their time more efficiently completing tasks that directly impact the bottom line. Employees that were previously tied up in flight sourcing and planning can now spend their time lining up new projects, expanding client accounts, training and developing new skills, working on priority projects, etc.

UAVs have massive potential, particularly for smaller firms looking to stand out against competitors' bids and looking to grow into large-scale mapping projects locally and nationally.

AirWorks Automate, our autonomous feature extraction software for remote sensing data is one of the ways firms using UAVs to collect datasets for survey-grade and construction projects. Our software is powered by AI and can identify and classify points across 10 layers completely autonomously. Learn more about AirWorks below.